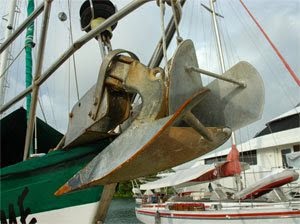 Want to start an instant argument in a waterfront bar? Just bring up anchors and anchoring and you’ll regret changing the topic from politics. Nothing brings out more heated opinions than the best choice of anchor and how to use it. And don’t try changing the subject by asking how to rig a second anchor, or you might be thrown out of that bar by the bouncer.

Being a safe distance from that bar and that cruising crowd at the moment, I get to now write a few carefully chosen words on the subject of how to choose, rig, and use that second anchor.

1 + 1 does not equal 2
First, the Number 2 anchor isn’t a Number 1. You can still find many books that tout the idea of rigging your cruising boat with dual bow rollers on which you stow a secondary anchor right next to the primary. You’ll also see a lot of these dueling primaries out on the water. The idea with this arrangement is that in case you start to drag, you’ve got a second anchor ready to go in an instant — just as big and strong as the primary — or, if expecting a big storm, you can set that second anchor in a V off the bow, as extra insurance.

There are a few things wrong with this idea. First, your primary anchor should be a big, heavy one that can handle almost anything, up to and including full gales or worse at anchor. It will usually be backed up with a lot of heavy chain that is cranked in with a large windlass. That can be a lot of weight up on the bow. Take a typical 45-pound anchor, with 200 feet of 5/15-inch chain (at least 200 pounds), maybe another 100-200 feet of nylon on the end of that, a windlass, assorted anchor rollers, cleats, shackles and whatnot, and there will very likely be over 300 pounds right out on the nose of your boat.
A lot of people believe that a secondary anchor needs to be as big and strong as the primary with plenty of chain, so then double the weight (almost) and don’t be surprised if you feel like a submarine in an old WWII movie — “Dive, dive, dive!” — the next time you find yourself in a big head sea offshore, or running off down some big waves. I have never been in a gale offshore where I wished I had more weight in the anchor locker.

Alright, you think your boat can handle the weight, and you need that anchor there for “safety.” Yes, there are scenarios where anchor No. 1 is dragging, and dropping a second No. 1 anchor quickly can be a good idea, but it is often a mistake to drop the same or a similar type of anchor and expect much better results. What happens then if that second anchor and chain doesn’t hold? Can you lead the second primary anchor’s chain cleanly to the windlass? How do you crank them both in while motoring up into a gale? Do you have two people to work that mess up on the pitching foredeck? This exercise will of course be garnished with an icy rain pouring down the back of your neck in pitch-blackness at 0200.

In my experience, if No. 1 is dragging, you are very likely going to have to move anyway to get your boat back into a safe position. I have already chosen my No. 1 so that it won’t drag, so if it is moving then something is wrong — the anchor is fouled, the bottom is unusually weedy or hard, or possibly it wasn’t set well to begin with. Now if you drop that second primary anchor and chain, it might stop your boat, but you will be well downwind and your second anchor possibly will be in the same poor holding conditions.

Where 2 &gt; 1
This is where my preferred No. 2 anchor setup comes in. I want an anchor that is not rigged in such a way that it has to live on a bow roller right next to the main anchor. In addition to the weight issue, bows are narrow. Putting two anchors side by side means the anchors can only be so wide. Modern, so-called “new generation” anchors are very wide with hoops and big scoop-shaped flukes. Stowing two of those things next to each other is a puzzle that doesn’t need to be solved.
My preferred secondary anchor is one with lots of holding, yet is light in weight and backed up by mostly nylon line so I can stow it all in a sail bag for easy movement anywhere on the boat or into the dinghy. Yes, sometimes the anchor needs to back up the dragging No. 1, but instead of dropping the anchor where the boat has dragged to, I take it out well to windward in the dinghy and at a V to the angle of the other anchor. Because the nylon is in a bag, I can dump the whole lot in the dink and run it out in an instant at high speed instead of waiting while the boat slowly drags backwards far enough to give me adequate scope for holding, but not so far that I’m aground.

If a blow is expected, I will have everything ready to go, possibly on the side deck up forward so I can just bring the dinghy alongside and put the anchor and line in, or have someone pay out the line from the foredeck. The line can be lead easily to the windlass or even back to the cockpit winches, which are more powerful than any windlass. I once dragged a 22,000-pound wooden double-ender through the mud, well heeled over, using the three-speed self-tailing cockpit winch. Plus, cockpit winches can handle lines from strange angles that would be hopeless with a bow-mounted windlass dealing with chain. A few snatch blocks can often solve almost any strange rope anchor lead problems. When it is time to bring in your two anchors, it is much easier to handle one on line and one on chain than it is to struggle with two on chain at the same time.

Complete with 200 feet of 5/8-inch nylon and about six to eight feet of chain in a sail bag, I can easily carry my secondary anchor and the entire rode around the boat to where I can best use it.
Aluminum Fortress FX-23 anchors, for example, are light enough that I have swum them out using flippers, a mask and snorkel many times while in warmer waters. It may sound like a stunt, but when in very clear water in places like the Bahamas or the San Blas Islands off Panama, swimming the anchor out can be an ideal way to place it in just the right spot, particularly when the holding ground is iffy or there is coral around you want to avoid. With heavier anchors like the FX-37, you can float them using a boat fender, though I wouldn’t recommend it with anything larger.

Options, options
Getting your second anchor out of its rut on a bow roller provides you with many other options. For example, when anchored in very shallow water, I sometimes drop the anchor off the stern of the boat and then lead the line back to the bow, creating an instant Bahamian moor. With the anchors in opposite directions, your swinging circle is greatly reduced, which is an advantage in a crowded harbor or when you have to avoid obstacles. There were places in the San Blas Islands where very tight anchoring areas were surrounded by coral. If you dropped your main hook in the middle there was insufficient room to put out adequate scope or you would have your rudder on the rocks. A typical anchoring technique would be to drop the bow anchor closer to the reef, then to take the secondary anchor out in the dinghy to the other side of the clear area. Both anchor rodes would lead to the bow and you would adjust your position so the boat was in between the hazards even if the wind switched 180 degrees.

In other places I have occasionally taken the Fortress out into the shallows and set the anchor by hand (and foot). This was necessitated by lack of swinging room to windward of the main anchor. I’ve also used this technique to make sure the Fortress was perfectly dug in when expecting a big blow, and occasionally to be able to set it on a very long rode well away from other boat traffic.

The tangled web we weave
The big objection I always get when making this argument is that “the anchors will tangle.” Yes, if you leave the boat for days or weeks on two anchors it is possible to have the anchor rodes wind up into a difficult mess. However, putting the rode in a sailbag means that periodically I can simply pass the bag full of line around the main anchor chain and untwist the two — typically once or twice a day, and you’re done. I find this a small price to pay for the flexibility of having the second anchor rode in a bag, ready to move where and when I need it. The bottom line for me is that in the worst-case scenario, I would prefer a couple of tangled anchor rodes to a boat on the rocks.
Another option I have occasionally used is creating a temporary mooring by lashing the two anchor rodes together. This can work if you are expecting a major wind shift or two with very strong winds, which would make it difficult to re-adjust everything during the storm. Take multiple wraps around the two rodes, leading from the bow, and then let out enough extra scope so the joint is below the waterline. That will help keep the two rodes away from catching on your keel or the rudder when the wind switches around. A third anchor can be added to the mix, creating a star pattern that is far more capable than most permanent moorings. I have used this technique to anchor in hurricanes, tropical storms and when leaving a boat at anchor for long periods.

Greater than the sum of the parts
Using an optimized primary anchor system with an optimized secondary anchor system provides more anchoring options and greater security than the typical dueling primaries seen on the bows of many boats. You’ll be carrying a lot less weight way out on the bow, and you gain the ability to quickly launch the anchor via dinghy, which is often the best way to get an anchor in the precise position where you need it, instead of the position your boat has dragged to. I haven’t even mentioned the ability to use the second anchor to pull your boat out backwards when you go aground, which I have done more times than I care to remember. As always, choosing the right tool for the job means a better result.