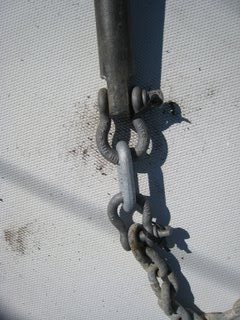 With an anchor that only allows me to put the pin of the shackle through the shank, I was forced to use a second shackle in order to connect the anchor chain. This resulted in an awkward set of shackle pins that were oriented at right angles to each other, meaning the heads of one or the other pin would often hang up on the roller, making retrieving the anchor more difficult. In fact, this system meant that 50% of the time there was a good chance that one anchor pin head or the other was going to catch.
I contemplated replacing this awkward linkage with a stainless steel anchor swivel, which is seen on many boats these days. However, having read reports of some failures of these items, particularly under side loading, and being rather wary of putting dissimilar metals together immersed in saltwater, I wanted to stick with tried and true galvanized steel fittings.
The solution that came to me was to purchase a Crosby welded master link, as can be seen here. The 3/8" link matched up nicely with my 3/8" shackles and the working load was higher, so this would not be "the weak link."
As can be seen in the photo, adding this one extra link allows the shackles to lay in the same orientation, with the heads of the pins on the same side. This reduces the chance of one of the pins hanging up on the roller since 3/4 of the four possible orientations are free of catch points.

In practice the new arrangement does come in over the roller very easily and so far (knock on wood) I have lucked out and not had a catch this season. Of course it is still possible for the chain to come in with the pins facing down in the catching position, but in practice I find that the assembly seems to flip onto the flat side very readily, allowing the chain to come in. In the past that first flip often meant it would then hang up on the second shackles pin (at least 50% of the time), which it no longer does.
This is a cheap, simple, strong, and effective improvement to my anchor system.
Email ThisBlogThis!Share to TwitterShare to FacebookShare to Pinterest
Newer Post Older Post Home