Go With the Flow 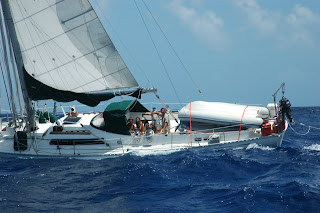 Having spent most of the last two years cruising around the Caribbean, I get a lot of questions from folks about proposed routes and schedules. Unfortunately, a lot of the time I have to shoot down others' ideas on this subject, because winds, currents, and seasons just won't cooperate.

It may be that someone is on the coast of Venezuela and they get the idea they want to return to Florida by the shortest route, in the middle of the winter (you know who you are!). This just isn't a good idea. Winter winds and seas between Venezuela, Colombia, Jamaica, and Cuba are just brutal--I'm talking about 30+ knots and 15+ foot seas. That's not my idea of cruising. You might be able to wait and wait and eventually get weather windows, but you might not. It is just not worth it fighting the elements like that.

On our way south, we were late leaving Florida (May) and had to push south towards Panama quickly in order to beat the start of the hurricane season. As it was, we had a long, slow slog to windward, fighting the Caribbean Current half the way, with thunderstorms harassing us constantly. I would never do that again. The season's first tropical depression formed just after passing over us as a tropical wave--we were lucky to not have worse.

The best voyaging advice I can give is to buy an old book like a '60s or '70's version of Hart and Stone's Cruising Guide to the Caribbean, written prior to everyone having GPS, SSB, and powerful engines. The winds and currents haven't changed and their advice is the best I've found. Back that up with a full set of pilot charts for the area you're in and don't try to micromanage your weather by squeaking between systems and going against the odds. Have fun!
Email ThisBlogThis!Share to TwitterShare to FacebookShare to Pinterest
Newer Post Older Post Home